Posted on February 1, 2021 by VOLK REAL ESTATE / Source: HOUSEOPEDIA ALL ABOUT HOMES 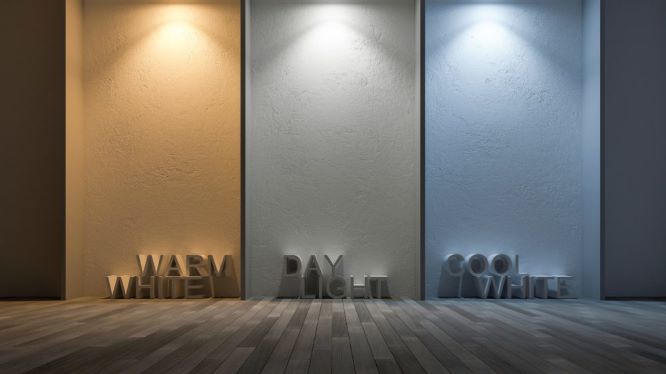 Lighting is measured by two metrics: lumens and watts. Lumens measure a bulb’s light output, and watts are the measure of electricity needed to generate that output. A Light Emitting Diode (LED) bulb uses only 20 percent of the electricity that an incandescent bulb does to produce the same lumens — a big cost and energy savings.

LED light bulbs come in warm white, natural white and cool white. What do these names mean, and how are the various colors best used in your home?

Lighting power is described on LED bulb packages with a number shown in thousands followed by the letter “K,” which stands for kelvins, the unit used for measuring light temperature. The tone of the light from a bulb covers a temperature scale from “warm” light, with a slight amber tint, to “cool,” with a brighter white tint. The higher the number before the K, the brighter and cooler the light.

A 2700K bulb, for example, will cast a warm look, making for a more relaxing setting. A kelvin range at or above 5000K means light from the bulb will be bright, cool and possibly harsh. At the midrange of the kelvin spectrum is natural lighting, with a kelvin rating of around 3500K.

Bulbs in the lower-kelvin range work best in most of the house, from living areas to bedrooms. Lighting can affect your mood, so a warm look invites relaxing in these rooms. Lower-kelvin bulbs are closest to the old incandescent “soft white” lighting.

Higher-kelvin cool lighting is best for work areas such as the laundry room, garage and workrooms. This lighting brings out detail and color in a room. Most commercial offices use cool lighting, so it also makes sense for task-oriented residential rooms.

The décor of a room can also play a role in your lighting selection. Areas with rich wood floors and furniture benefit from warm lighting. Rooms with lots of white might look best with midrange natural lighting. The highest cool white bulbs, however, could make mostly white rooms look stark or even harsh.

Not intended to solicit buyers or sellers currently under contract.